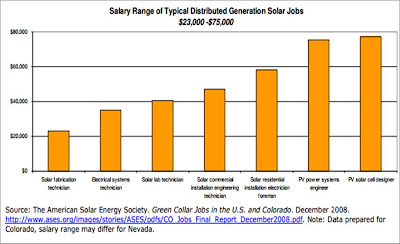 If Google’s Doing It…

How has Google done so well? Certainly part of its success has come from its multi-billion dollar investments into clean energy projects. Rick Needham, Google’s Director of Energy and Sustainability sums up the investment decision quite well, “While fossil-based prices are on a cost curve that goes up, renewable prices are on this march downward.” Furthermore, it is only logical to invest in an accessible and limitless resource such as wind or solar, rather than investing in fossil fuels that are hard to extract and limited by definition. Hopefully Google will continue to act as a leader in the clean energy arena, just as it has in so many others.

Here are some of Google’s sustainability achievements

We at Coalition for Green Capital hope to see more global corporations like Google investing in sustainability and renewable energy in the near future. With the development of green banks that make commercial-level loans for solar and wind installation, these investments will become easier, more reliable, and more cost-effective.

*Statistics and background information for this blog post can be found here.

California has paved the way for the American cap-and-trade market, why not do the same for green banks? A recent article published by Bloomberg suggests the possibility of using revenues from California’s cap-and-trade program to set up a state green bank. The program, implemented just this year, has already sold 23.1 million allowances in November, 12.9 million in February, and 10 million “advance” allowances to cover future emissions. Over time, the cost of allowances will raise as the emissions cap falls.

Lieutenant Governor Gavin Newson has proposed that the revenues from the program go toward other mechanisms for reducing GHG emissions, namely a state-run Green Infrastructure Bank. The purpose of the bank will be to make low-interest loans to public and private organizations investing in environmentally friendly practices.

Clean Energy in Nebraska – How do they do it?!

Now that the price of solar hardware has steadily declined, the remaining costs associated with solar PV installation come from soft costs. In fact, customer acquisition costs have been cited as the single largest soft cost. According to SunRun, sales and marketing alone constitute over 25% of residential installation costs. How can the solar industry overcome these challenges? Maybe it should take a look at Nebraska’s Dollar and Energy Saving Loan Program.

Nebraska’s Energy Office founded the Dollar and Energy Saving Loan Program around 1990, using capital from the 1982 oil overcharge funds and the 2009 American Recovery and Reinvestment Act.  The program provides low interest rate loans (2.5-3.5%) for residential, commercial/industrial, and agricultural energy efficiency, renewable energy, and waste management projects throughout Nebraska. Since its inception, the Dollar and Energy Saving Loan Program has financed a variety of projects worth $271.29 million. Also, thanks to the program’s low default rate of 0.008%, more than $125.13 million of the $271.29 million came from revolving funds. Despite regional population declines and worsening rural flight in Nebraska, the Dollar and Energy Saving Loan Program continues to transform the energy market in every one of Nebraska’s 93 counties.

This program is one of the first to consistently acquire customers from every county in the state with nearly no marketing or publicity costs. The average price of residential electricity in Nebraska is well below the national average, yet more than 93.4% of the energy efficiency projects funded by the Dollar and Energy Saving Loan Program are residential.

So we wonder – what makes these programs so attractive to customers across Nebraska? One would think that in states where electricity prices are even higher than those in Nebraska, a program such as this one would be even more desirable to ratepayers. Nonetheless, customer acquisition remains one of the greatest soft costs nationwide.

Check out this map of all the projects funded by the Dollar and Energy Saving Loan Program across the state:

So, how do they do it? What can other states do to open up their clean energy markets in the way Nebraska has?