After a year in which much of the state was in moderate to severe drought and experts warned that unchecked emissions in Maine could lead to warming of 10 degrees by 2100, advocates and scientists said making progress in the fight against climate change will be crucial in 2021.

Ania Wright, the youth representative on the Maine Climate Council — which produced a report in early December outlining the state’s four-year climate action plan — said it’s clear the seriousness of global warming demands that people from all different backgrounds work together to find solutions.

“Everybody’s needed in the fight against the climate crisis,” Wright said. “We need policy experts, we need people out on the streets, we need artists, we need researchers — we need everyone.” 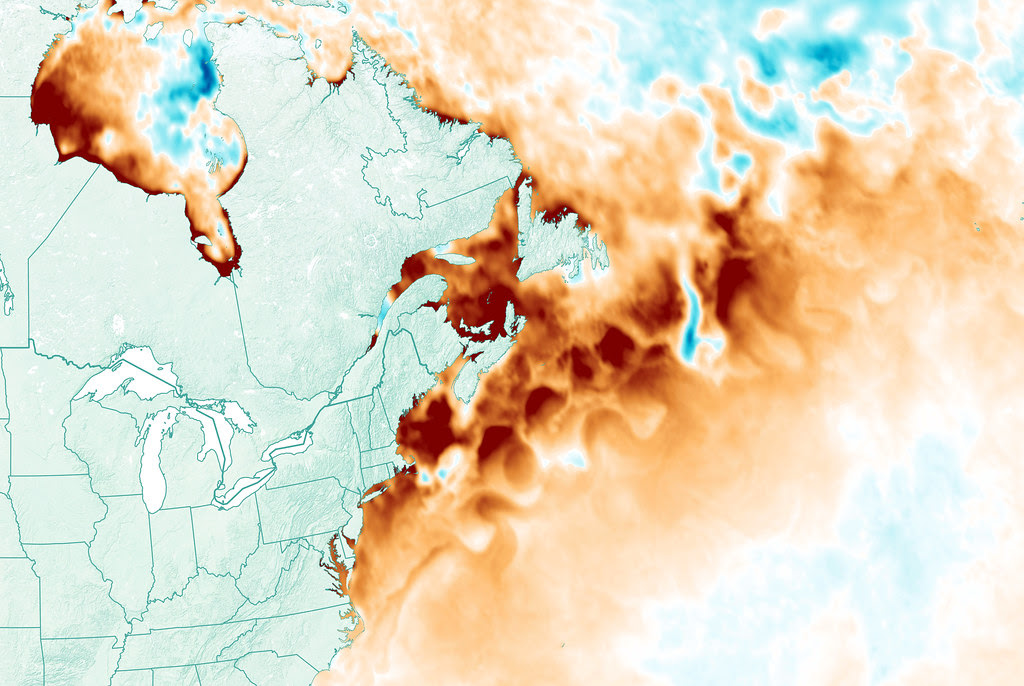 A heat wave in the Gulf of Maine in 2018. | Stuart Rankin via Flickr

Wright said when it comes to public policy in 2021, she hopes the legislature takes action to implement initiatives in the Maine Climate Council’s plan, which centers around decreasing greenhouse gas emissions 45 percent by 2030, 80 percent by 2050 and making Maine carbon-neutral by 2045.

Wright added that funding the policies included in the plan will be crucial, pointing to the idea of a state Green Bank — which would help raise money to fight climate change — as one potential mechanism.

On the grassroots side, Wright said she’s focused on working to broaden the diversity of voices included in the climate movement. Wright, who is also part of a consortium of climate groups called Maine Youth for Climate Justice, said that members of that group have been discussing the importance of getting more educational resources about climate change into schools.

“All over the United States, we’re so behind in terms of climate education because of political reasons and because science has been so politicized,” she said. “So I think there’s a strong need there.”

Other more localized environmental issues Wright is focused on include getting stronger emissions data about how an oil tank storage facility in South Portland is impacting residents and closing the legal loophole that allows the Juniper Ridge Landfill to accept out-of-state waste.

Wright said it’s crucial that activists take advantage of the year ahead to both make progress on climate change at the local level and push President-elect Joe Biden to take aggressive action at the federal level.

“The grassroots momentum is really growing all over the nation, and I think that was something that was missing four years ago and during the Obama administration, and I would hope that that’s really going to push the [Biden] administration to be a lot bolder than maybe we anticipate them to be,” she said.

‘The longer we wait, the greater the damage’

David Reidmiller, director of the Climate Center at the Gulf of Maine Research Institute, agreed that 2021 will be crucial in the fight against climate change.

“The longer we wait, the greater the damage and the higher the costs,” Reidmiller, a member of Biden’s transition team, said in an email. “We’ve largely been enjoying a free ride, so to speak, for more than a century, doing very little — especially until quite recently — to address the consequences of putting greenhouse gases into the atmosphere.”

“When coupled with the drought conditions that can precede these heavy rainfalls, flood risks intensify, and we’ve certainly seen that play out,” he said.

Another area of concern, Reidmiller said, is increased temperatures in the Gulf of Maine — which is warming faster than 99 percent of the world’s oceans. And that warming pattern has been going on for a while now, as a NASA report from 2018 found the Gulf of Maine had warmed by 0.11 degrees per year in the past three decades, three times faster than the global average.

“These changes can have significant impacts on those who rely on the ocean ecosystem for their livelihood and well-being,” Reidmiller said.

Given that reality, Reidmiller said the Climate Center will be focusing in the next year on engaging with fishermen, aquaculture farmers, municipal leaders, scientists and others to identify climate-related issues in marine and coastal areas. Such issues could include fisheries management, aquaculture business planning, seafood supply chain innovation and coastal community resilience, he said.

However, Reidmiller said the Center is also looking to find ways to address the issues identified.

“We’re in the business of developing solutions — a tailored suite of options to reduce climate-related risks and, importantly, capitalize on any climate-related opportunities that might emerge,” he said. “This will include policy analysis, in-depth analyses on the economics of climate change and exploring new ways of decarbonizing that create new market opportunities for Mainers.”

Berry said to decarbonize, Maine will have to transition its energy use over to electricity. However, that could be an expensive and problematic process if the state is relying on investor-owned utility companies, which have an imperative to deliver profits to their shareholders, Berry said.

“If we are going to transition to electricity … in order to decarbonize, which is really the only significant means available to us, then we have got to make sure it’s done affordably and reliably,” Berry said.

“What rates someone will pay and reliability — how many outages and for how long — are incredibly important as we go forward, and consumer-owned utilities are a proven model to do that well,” he said.